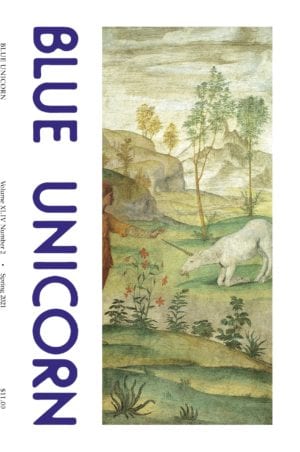 The question comes up. If you don’t care for the bulk of the poems you read today, what do you admire? And don’t go back seventy years. What do you like that’s reasonably new?

Sitting down to answer this question, I kind of surprised myself. I like a lot. It may be a tiny percentage of what I read, but a minuscule fraction of a deluge is still a lot of water. And as a magazine editor—the Spring issue of Blue Unicorn just went into the mail—I take much more pleasure in saying Yes than No.

It is indeed a question of what I like, not who. “There are no great poets, only great poems,” Lawrence Hart liked to remark. Nobody hits the mark all the time. But as Ezra Pound wrote a century ago, “If a man write six good lines he is immortal—isn’t that worth trying for?” That man, these days, is rather more likely to be a woman, but the principle holds.

While I tend to like underdogs more than the regular denizens of Poetry, The New Yorker, and the like, there are exceptions. The glaring one is Kay Ryan, recent poet laureate, whose compact constructions have earned her about every recognition you can think of. If I could, I’d add another. Then there is Nobelist Louise Glück; I will not forget, for instance, her late “The Arboretum” (encountered in The New York Review of Books).

But there are total surprises. I had never heard of Gabrielle Calvocoressi before I read her haunting narrative of pollution, “The Death of Towns,” in Literary Imagination. Of the Brit Miles Larmour, before I saw his family drama “The corncrake, alive and cupped” in the UK publication Orbis. Of the Californian David de Leeuw before I heard him evoke an alpine landscape in an almost empty café in Berkeley. Of Tom Laichas, author of tellingly displaced Biblical parallels, until his work popped up in the inbox of Blue Unicorn. I was barely aware of the Frenchman Benoît Conort till I saw him at BU in translations by Kim Cushman: a successor to Yves Bonnefoy? I won’t mention, this time, poets who are or have been students of mine.

To even begin naming people is to leave dozens out, and what can a reader make of a string of names and titles? So what kinds of poetry am I responding to?

One of my weaknesses is for formal work. When ably handled, rhyme and meter greet me like old friends. Writers like Mary Jane Salter, Susan McLean, and Dan Campion wield these tools with the seeming effortlessness that shows how hard they work. (The deliberate torture of form can be lots of fun, too. Mere sloppiness, never.)

Without form, as Galway Kinnell said, “the responsibility for the poem [lies] wholly on speech itself.” Word by word, the language must do more—make us see, make us feel, sometimes (no lecturing, please) make us think. None of this happens without an element of daring that, in contemporary verse, is rare. I am always alert for signs of the itch to get beyond first thoughts and easily-come-by words. As an editor, I’ll take a somewhat rough piece with some standout lines over a smoother one that makes fewer demands.

If I did an annual anthology—a fantasized Poems John Hart Likes Quite a Bit—it wouldn’t have the heft of the influential Best American Poetry series, which logged 268 pages in 2020. But it wouldn’t be a chapbook, either.